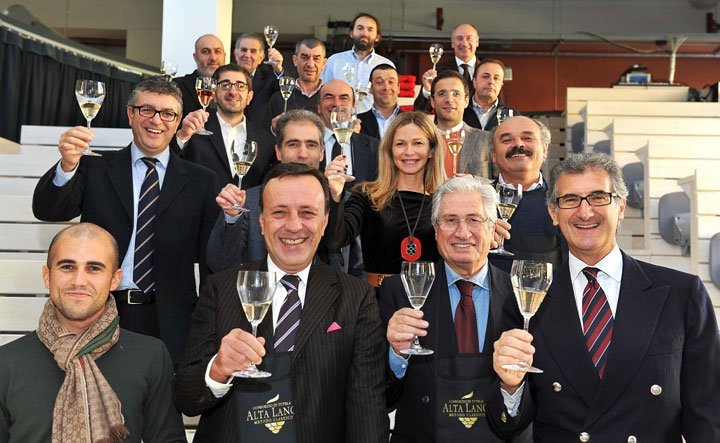 At Fontanafredda the 12 Spumante Producers have presented the communication capmpaign of the Consorzio di Tutela. Guest of honour was Sir Giorgetto Giugiaro with “Grande”, the exclusive glass designed for Alta Langa.

The official presentation of the communication campaign of Alta Langa DOCG was held yesterday morning at the Mirafiore Foundation in Fontanafredda, in the presence of restaurateurs, enoteca owners, distributors and wine journalists. Oscar Farinetti and the President of the Consorzio Lamberto Vallarino Gancia did the honours. The patron of Eataly, when welcoming the numerous guests, has not hidden the fact that he has always been a great supporter of Alta Langa and has asked for everyone’s collaboration in order give this traditional method spumante the place it deserves in the restaurants’ wine lists, particularly in Piedmont. «Alta Langa is a true pride of our territory, and as such it must be promoted and adopted by those operating in this field, as it represents a remarkable heritage of culture and tradition that must be transmitted» illustrated Farinetti.

Lamberto Vallarino Gancia instead went over the main steps of the Alta Langa, Project started in 1990 through a field research made possible by the financial support of the major Piedmontese producers of traditional spumante and the technical and scientific contribution of the work group coordinated by Dr. Corino of the Experimental Viticulture Institute of Asti.

Today the Consorzio di Tutela has consolidated and enhanced that experience, and the recognition of the DOC in 2002 and DOCG in 2010 (with the possible retroactive claim starting from the 2008 harvest) are the most concrete and convincing proof.
«The base for this top quality spumante is the great care of the vineyards and the grapes – explained the vice president of the Consorzio Carlo Bussi, representative of the agricultural part. Our goal as winegrowers is to produce the best possible grapes every year in order to constantly improve the quality of the raw materials, without which no great wine can be produced».

The Consorzio has then illustrated the project of enhancement and promotion presented to the Region of Piedmont. The headline of the entire institutional communication of Alta Langa DOCG – which started in the month of October – is “Piedmontese Pride”, concerning the Region of Piedmont and its territory. An expression that has effectively combined with the name of the wine, to highlight the perfect combination of the importance of the territory, the quality excellence and the ever-growing potentialities of the most prestigious Piedmontese spumante millesimé traditional method.

More in detail, the Alta Langa DOCG promotional plan envisages a series of local and international events, along with a presence in the main regional newspapers and an outside visibility by means of a billboard campaing in the major Piedmontese cities.

Since excellence attracts excellence, the highlight of the project was the collaboration of Consorzio di Tutela with Giugiaro Design for the creation of “Grande”, a magnificent tasting glass, exclusively designed for Alta Langa.

At the Foundation Mirafiore, Sir Giorgetto Giugiaro himself has illustrated the various steps undertaken towards the creation of this glass, a true designer object, as well as its characteristics: a narrow base to facilitate bursting of the bubbles towards the top of the glass, where it widens to enhance the scents of the wine.
To complete the glass is a spiral engraving on the stem for easy grip in order not to place fingers or the whole hand under the bowl and on the foot – beside the producer’s brand, the German Spiegelau – characterized by a particular shaping of the glass reminding of the gentle hills of Piedmont, is the signature “Giugiaro for Alta Langa” to make “Grande” a truly unique and exclusive glass.