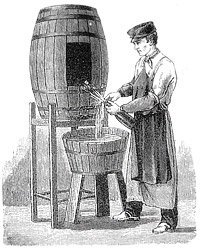 The first Italian classic method of sparkling wine was created in Piedmont. Way back at the beginning of the 19th century, the counts of Sambuy, influenced by their geographic and cultural proximity to France and its wines, began cultivating a few French grape varieties – primarily Pinot Noir – in Piedmont, to make sparkling wines similar to Champagne.

After completing his studies in oenology, Carlo Gancia set out for Reims, intending to learn the secrets to the production of Champagne. Upon returning home, in 1850 he and his brother Edoardo launched a small-scale company, where in 1865 they produced an Italian Spumante using the same “champenoise” processing techniques.

Convinced that the Piedmontese terroir was perfect for growing grapes for the production of spumante, the F.lli Gancia company began to work and experiment, cultivating Pinot Noir mainly around Canelli, paving the way for numerous other local producers.

The production of Spumante developed from the beginning of the 20th century thanks to the Houses of the time. They flanked their exports of Vermouth of Torino with the Piedmontese spumante Metodo Classico and have continued to produce it ever since.

The “Spumante Metodo Classico in Piemonte Project” was officialised, with the presentation of the proposal to the Piedmontese Regional Councillor for Agriculture, Emilio Lombardi. The representatives and managers of the Experimental Institute for Viticulture, Antonio Calò and Lorenzo Corino, were also present.

The need to make the “Spumante Project” independent from the DOC Piemonte emerged during a Regional Council meeting. The “Spumante Project” was to concern only a limited area of the provinces of Asti, Cuneo and Alessandria, for the cultivation of Pinot Noir and Chardonnay grapes for the production of the classic method Spumante, while the DOC Piemonte was to regard wines made with Pinot Blanc, Pinot Grigio, Pinot Noir and Chardonnay, cultivated in a larger area of the three provinces and produced using both the Martinotti (fermentation in sealed tanks) and classic methods.

The experimental vineyards became a reality: 21 estates were involved during the first year, covering a total area of approximately 20 hectares, with the planting of 80 thousand vine rootings (85% Pinot Noir, with 10 different clones, and 15% Chardonnay, with three clones).

The “Spumante Project” was officially presented to the Industrial Union in Turin, in the presence of journalists, producers and the authorities.

The fruit of the first 18 hectares of experimental production was vinified.

Work began on the drafting of a series of production regulations. Based on territorial and toponomastic research, the chosen name was “Alta Langa”.

The first toast with Alta Langa Spumante at the premises of the Comunità Montana, in Bossolasco: the procedure for acknowledgement of the Alta Langa appellation had already been launched, and this was the official debut of the new Piedmontese classic method sparkling wine.

The Italian Official Gazette published Decree 31.10.2002 of the Ministry of Agricultural and Forestry Policies, acknowledging the Alta Langa appellation: the wines of the Alta Langa project, which had been released as Piemonte DOC until that time, finally had their own DOC.

Publication in collaboration with the Piedmont Region of the book “Alta Langa Metodo Classico – Storia di un progetto piemontese”, written by Giancarlo Montaldo (Studio Montaldo), who was also responsible for all the historical research and data processing activities.

Alta Langa became a DOCG wine, (Controlled and Guaranteed Designation of Origin in English) the Italian highest wine quality classification, with acknowledgement backdated to the 2008 vintage.

It took place at the Grinzane Cavour Castle the 1st edition of “La Prima dell’Alta Langa” (The premiere of the Alta Langa): the event where all the Alta Langa Consortium producers present the new Alta Langa vintages.