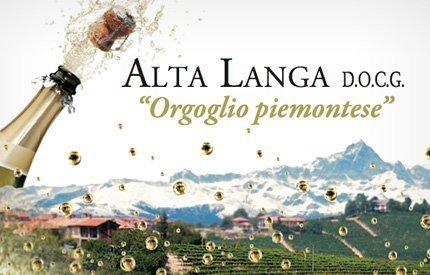 Alta Langa DOCG, which has constantly proved to be an excellent, prestigious wine in the Italian panorama of spumante wines, will be the centre of a project of valorization and mostly promotion created by the Consorzio di Tutela with the support of the Region of Piedmont.

The goal of the Alta Langa DOCG Consorzio di Tutela for the last part of 2012 (and for the spring of 2013) is that of making consumers aware of this Piedmontese spumante, which represents the ultimate true novelty of the wine sector of the region.

Exclusively produced in the millesimé version, which means it bears on the label the year of production – an indication, in the spumante field, of a highly prestigious wine – Alta Langa, young and with its modern character, is gaining growing success and interest among journalists, experts and consumers, be they connoisseurs or enthusiasts.

Starting from these considerations, the Consorzio of Protection has created for the first time a communication project that envisages a series of events, along with a presence in the main regional newspapers and, last but not least, an outside visibility by means of a billboard campaign in the major Piedmontese cities. And since excellence attracts excellence, the highlight of the project is the collaboration of Consorzio di Tutela with Giugiaro Design for the creation of “Grande”, a magnificent tasting glass, exclusively designed for Alta Langa.

The headline of the entire institutional communication of Alta Langa DOCG will be “Piedmontese Pride” combined with the name of the wine, resulting in a perfect combination of the importance of the territory, the quality excellence and the ever-growing potentialities of the most prestigious Piedmontese spumante millesimé traditional method.

THE CREATION OF THE NEW GLASS

The new glass created by Giugiaro Design is a highly prestigious object and the natural complement to a perfect tasting, conceived with the goal of unequivocally identifying spumante Alta Langa DOCG amongst the public. Made by Spiegelau, the German company leader high quality glass production, it will be distributed by the Consozio and its associates.

The launch and presentation of the Alta Langa DOCG communication campaign will involve restaurateurs, enoteca owners, distributors and wine journalists. It will happen this coming November and will have amongst its objectives that of familiarizing the participants with Alta Langa DOCG through ad hoc professional tastings. The campaign will officially end in the month of May 2013 at Eataly, Turin.

A promotional advertising campaign will start on 9 October based on the theme Alta Langa DOCG in the newspapers La Repubblica and La Stampa, in the tri-regional edition; later, the major Piedmontese provinces will make use of large billboards (6×3 m). Both campaigns, with different intensity and reach, will continue until the end of May 2013.

PARTICIPATION TO FAIRS AND EVENTS